Turning a “Natural 1” into a Critical Hit

By: No Time Dad
In: Role-playing
Tagged: GM Tools, Role-Playing
With: 6 Comments

I am No Time Dad, thank you for stopping by! Today I am bringing you my opinion on a common feature in table-top RPGs, critical hits and critical fails.

For those who are unfamiliar with the mechanics, or those that need a refresher, here’s an overview. In most Tabletop RPGs, rolling the highest result possible is considered a critical hit while rolling the lowest possible result is a critical fail. This usually means that regardless of modifiers for the roll, you will either be guaranteed a success or a failure respectively.

“Natural 20s” have helped create some pretty memorable moments for me, but the truly great experiences have come at the result of a critical failure.

The Trap of Thinking Mechanically

As a Game Master, it is easy to get stuck in a mechanical mindset when it comes to critical rolls. Simply reiterating the effect, while mechanically sound, often falls flat at the table. 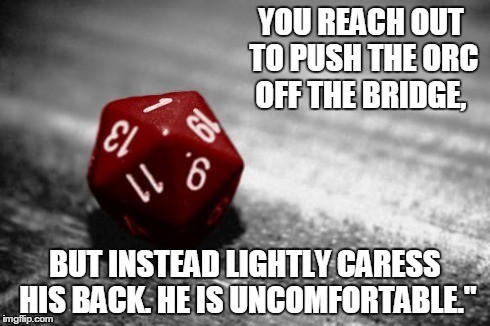 One of the simplest ways to remedy this is through the use of tables that have been created by the community. Essentially the GM makes a secret roll to determine the outcome of the situation. For example: a critical might cause an injury that could drastically change the tides in the current conflict.

As a player, these little bits of flair make sessions SO much better.

That being said, I have found myself focusing too hard on the instant effects of critical failures. I often make a stray arrow strike an ally, or a wild Fire Bolt set the environment on fire. With time, these also get old for the player and overall don’t add much to the narrative.

Thinking Outside the Dice Tray

One of the most exciting things I have experienced as a player, was a critical failure affecting the game way down the road. 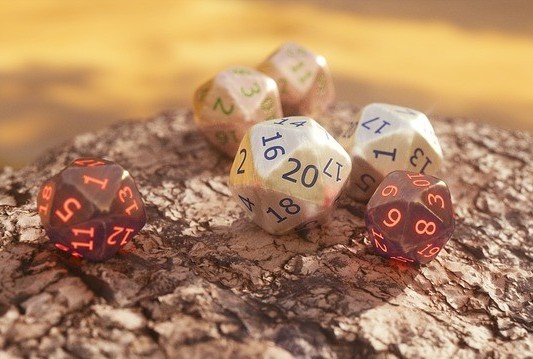 This was something I hadn’t really thought about as GM. Instead of the dice making you work, you make the dice work for you.

A player attempting to steal a file from an office after-hours, rolled a critical fail. Instead of punishing the player directly by sounding an alarm, you can opt to have the player (to their knowledge or not) drop something that might identify them to another entity. This opens up multiple options for you in the future. The player might be directly reported to law enforcement upon discovery or perhaps they are approached by an individual who wants in on the operation.

A fail could cause someone or something in the area to notice them. The “big bad” has been alerted to the party’s presence and has either called for increased security, or fled through a secret exit. Perhaps the individual alerted is neutral to the current conflict, a beggar spotting new targets to ask for coin.

These little things can add up, amplifying the excitement for the player and making your world feel alive.

The Most Important Rule

Know your party and what they want out of the game. I am always an advocate for bending certain rules, if it provides an overall benefit to the table.

What are your most memorable “critical” moments as a player and/or a Game Master?

What tips do you have for dealing with critical rolls?

Let me know down in the comments below!